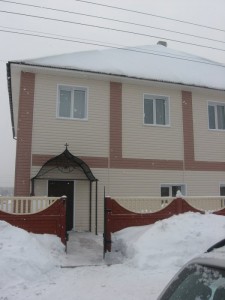 On the 19th of December, 2009 a new cloister of Discalced Carmelite nuns was hallowed in Novosibirsk

Siberian Carmel already has its own tradition, which is, though not very old, quite solid. It numbers more than ten years. In 1998, by the bishop’s decision a female Carmelite community of Christ’s Resurrection was established, and Sister Therese Mary, who came from USA, became its first dweller.

Bishop Joseph Werth tells us the story of the cloister:

«I remember that when I visited Rome as a bishop for the first time, we were told that Pope John Paul II had scarcely begun his service as a pontiff and come to Vatican when he invited Carmelite sisters there and built a cloister for them. Those sisters were constantly praying for Holy Father’s intentions, and their prayers supported him in all his pastoral deeds. That’s why, when in early 90s I made an acquaintance of reverend mother Therese Mary by the letters and she suggested an establishment of Carmelite cloister in Siberia, the question “to be or not to be?” didn’t arise for me. No doubt, such a cloister is extremely necessary, especially for the country, in which atheism had been prevailing for seventy years, banishing faith from people’s lives. Quite a long time has passed, and now we are able to asseverate that the first period of Siberian Carmel’s formation is over. It has at last its own cloistral building, and this fact makes us all happy». 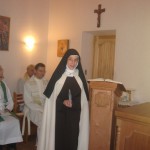 For the first few years the community had no building and had to dwell in a flat in a simple multistoried building. But cloister’s canon stipulates strict seclusion, and therefore it should be situated in a secluded place, isolated from noisy streets of the city and daily fuss. Such a building had been being constructed in Novosibirsk’s suburb for as long as five years (lack of funds made its impact), and by now its construction and decoration come to an end. The ceremony of the building’s consecration has marked the end of this period of the community’s life. 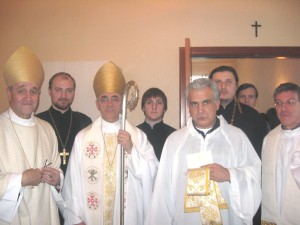 Apart from Apostolic nuncio archbishop Antonio Mennini, Diocese of Transfiguration’s bishop Joseph Werth and catholic clergy, the ceremony was visited by orthodox clerics, two priests and a subdeacon, who are personal representatives of Kemerovo’s and Novokuznetsk’s bishop Aristarchus. They gifted the cloister relics of saint Martiry, who lived in XIV century. In his salutatory letter, addressed to bishop Joseph Werth and Carmelite nuns, bishop Aristarchus wrote, among other things, the following: «Your Excellency ! With all our hearts we congratulate you with the consecration of the cloister of Christ’s Resurrection. Orthodox and Catholic Churches should assist each other in strengthening and spreading of the Christian spirit of peace and love. Monastic orders and Carmelite congregations form a society, the existence of which is based on a mere prayer and love in the first place».

Monsignor Joseph Werth, while greeting nuns and orthodox brothers, called the consecration of the cloister «ecumenical». «Patriarch of Moscow and all Russia Kirill became the first person who wished me a happy Christmas, though it comes only in a week. And I ask you, dear sisters, in your prayers for the local church pay your special attention to one intention, which is the unity of all Christians », — said bishop Joseph.

Apostolic nuncio archbishop Antonio Mennini in his sermon conveyed the nuns of the cloister being consecrated congratulations from His Holiness Pope Benedict XVI.

Right after the mass all guests had a possibility to congratulate the Siberian Carmelite nuns with such an important event in their life and to talk to them (in accordance with the canon of Carmel – through a «lattice»). 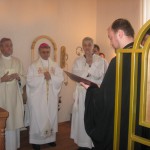 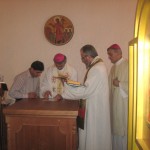 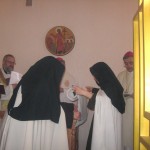 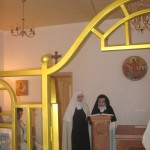 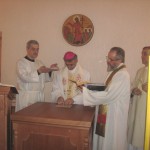